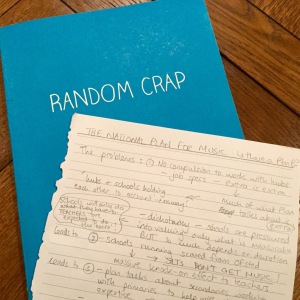 As David revealed to the world, I was speaking from notes scribbled in a notebook entitled ‘Random Crap’ – here I hope to unravel my ramblings into a set of terse points…

There are a number of problems, as I see it, with some of the content of the National Plan for Music. These are:

My plan B would require a huge commitment from a number of different groups. Getting primary music  right is crucial here. Headteachers need to commit to music projects in the curriculum – singing projects and Band on the Run-type schemes that are sustained (i.e. not just a 10-week flash in the pan) and involve kids taking instruments home. There needs to be a critical mass of enlightened headteachers at primary level to make this the norm, not a special thing.

There needs to be some proper qualification specifically for teachers to be primary music specialists – at the very least a module of a PGCE, but even a whole special PGCE.

SLTs (primary and secondary) need to be educated about the fact that music is different from other subjects. This could be done at hub level by the new Music Champions – headteachers may well listen to their peers. Time and money needs to be allocated for primary partnerships and other good stuff – curriculum time.

Each hub needs to have an adviser/curriculum specialist to work with all schools in the area – perhaps as an accepted part of every music teacher’s annual CPD. However, this brings me to the major financial problem. Let’s say this adviser would be paid £50K. With on-costs, this will cost the hub £65K. I would love that job – until my hub tells me it’s on a one-year contract. No thanks – I’ll stay in my school. But hubs simply cannot plan more than a year ahead at the moment, owing to the uncertainty about their funding.

Hub funding has got to be nailed on for a 5 or 10-year period, so plans can be made and development can happen. This needs an interparliamentary group, to stop it from becoming an election pawn or sacrificial cow. We have a huge music industry in the UK – could they help? A big corporation like Sony could be involved, perhaps. But this needs someone at a very high level to sort out – I don’t think they’ll take much notice if I phone them  myself…